Tempest in a teapot: The attacks on Archbishop Elpidophoros and foreign policy stunts

For the Ecumenical Patriarchate, which has spiritual authority over the Church in America, Elpidophoros, 54, is the best and the brightest that it has to offer. 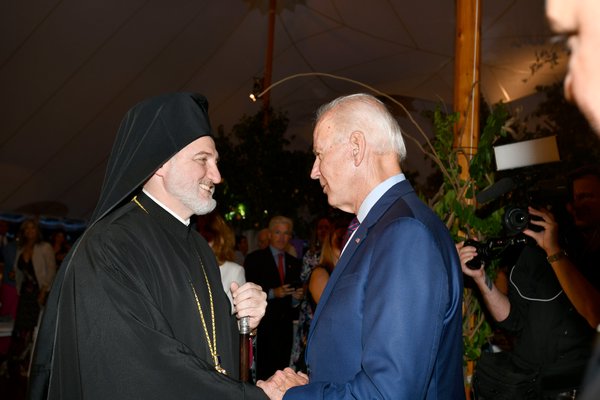 Those who are at all familiar with the Eastern Orthodox Church are well aware that Archbishop Elpidophoros (Lambriniadis) of America long before becoming leader of the Greek Orthodox Church in the US was one of its most eminent and respected hierarchs.

For the Ecumenical Patriarchate, which has spiritual authority over the Church in America, Elpidophoros, 54, is the best and the brightest that it has to offer.

He is the protégé of Ecumenical Patriarch Vartholomeos who discerned the young Ioannis Lambriniadis’ intellectual and spiritual gifts and took him under his wing after the young layman finished his studies in Germany. He went on to get a Ph.D. in Theology from the University of Thessaloniki, where he was elected Assistant Professor of Symbolics, Inter-Orthodox Relations and the Ecumenical Movement, achieving the rank of full professor in 2018.

When he ordained him, Vartholomeos gave his deacon the name Elpidophoros – or hope-bearer – and many in the Church later saw that as foreshadowing his high hopes and future plans for the young deacon, whom he saw as his prospective successor early on.

Some would say was he groomed for the job as he slowly but confidently climbed the rungs of the Church hierarchy from deacon to Chief Secretary of the Holy Synod and Metropolitan bishop, and Abbot of the Monastery of the Holy Trinity at the Theological School of Halki.

Entrusting Elpidophoros with pursuing and bringing more international attention to one of his most fervent goals is just one more indication of the nature of the relationship between Vartholomeos and Elpidophoros.

It is one of absolute trust on the one hand and absolute loyalty on the other.

Elpidophoros in interviews has said that he owes all that he is and has become to his spiritual father, Vartholomeos.

As expected, Elpidophoros succeeded in drawing even more international attention to the injustice of the Turkish state’s 1971 closure of the seminary, which historically has nurtured some of Eastern Orthodoxy’s most eminent personalities and leaders, including Vartholomeos.

The re-opening of the school is one of Vartholmeos’ most precious ambitions, and he has campaigned for the support of world leaders that he meets for decades. Despite repeated assurances and pledges that he will re-open the seminary, Turkish President Recep Tayyip Erdogan has not yet made good on his word.

Thirty-seven years after his arrival at the Ecumenical Patriarchate’s seat at the Phanar, in Istanbul, the prospect of Elpidophoros succeeding Vartholomeos is taken almost as a given among church observers.

The most impressive and recent example of that was Elpidophoros’ election as Archbishop of America. As its largest, most prosperous, and most powerful eparchy, the Greek Orthodox Archdiocese of America for the Ecumenical Patriarchate is the jewel in the crown, on which Vartholomeos keeps a constant, watchful eye, intervening when church crises arise and whenever he deems it necessary.

The position of Archbishop of America has an historical particularity. Though first and foremost his role is that of spiritual leader, traditionally he also is the informal leader of the Greek-American community, which numbers about three million but carries greater political weight than its numbers would indicate, in large measure due to the stellar accomplishments of its members in a host of areas ranging from politics and business to the sciences.

All previous archbishops at least from Athenagoras (later Ecumenical Patriarch) on, have met and maintained good relations with the US president of the day and are from time-to-time invited to the White House, including the annual March 25 Greek Independence Day celebration, yet another indication of the political significance of the Greek-American Community.

Due to his role as a leader of the Greek-American community, the archbishop maintains good relations and cooperates with the successive governments of Greece, the fatherland of his flock. In statements and in contacts with powerful divs in Washington at the highest level, he will speak out against injustices such as the occupation of Cyprus and the rights and just demands of Greece on the regional and international level, both in public and behind the scenes.

In that sense, Elpidophoros (and his predecessors) on one level acts as an invaluable transatlantic bridge between the US and Greece.

Elpidophoros was well aware of that role when he became archbishop and has served it impeccably.

Most recently, the archdiocese raised more than a million dollars for those affected by the disastrous August wildfires in Greece, which destroyed 130,000 hectares of forest fires.

On his twitter account – @ Elpidophoros – he said that the donation “reflects how deeply our faithful connect with their relatives, friends, brothers+sisters in Christ in the Patrida [fatherland]. 100% of donations will go to those in need+be publicly reported.”

He has also from the start of the COVID-19 a staunch pro-vaccine stance when many Orthodox bishops in Greece and elsewhere refused to accept the accomplishments and gifts of science.

In a 17 September tweet he stated firmly that, «Today the Holy Eparchial Synod declared that there is no religious exemption from any vaccine, including the COVID19 vaccine. Any such letter written by any clergyman of the Holy Archdiocese of America is not valid. No clergy are to issue such religious exemption letters.»

When Archbishop Elpidophoros – who is a member of the Greek minority of Istanbul, where he was born and raised in his early youth, and has Turkish citizenship – accepted an invitation and attended the inauguration and ribbon cutting by Erdogan of the new Turkish House right across from UN headquarters, little did he know that he would stir a small political maelstrom in Greece and Cyprus.

The reason was the fact that the event was attended by Turkish-Cypriot leader Ersin Tatar, who in concert with Erdogan is demanding a two-state solution on Cyprus. Naturally, Tatar attended the event as the “president” of the breakaway state established in 1983 (TRNC) in the Turkish-occupied northern part of the island, which is recognised only by Turkey.

It should be noted that the inauguration was intended by Antonio Guterres who in a warm statement extolled Turkey geostrategic role, particularly as regards its role in managing the huge refugee and migration problem.

Elpidophoros referred to the event in a tweet on the day of the inauguration of Turkish House that ignored the fleeting diplomatic brouhaha in Nicosia and Athens, and stood up for the rights of the patriarchate.

“I congratulated Pres. Erdogan on the opening of the Turkevi Center [Turkish House], together with UN SG Guterres. As always I insist on the importance of the Ecumenical Patriarchate, the re-opening of the Halki Theological School, and supporting the rights of religious minorities of Turkey,” he wrote.

The knee-jerk reaction of Nicosia and Athens was swift and tempestuous, because the leadership of Greece and Cyprus saw Elpidophoros’ move as an indirect legitimisation of Tatar and his role in torpedoing Cyprus settlement talks in the UN framework, which calls for the creation of a bi-zonal, bi-communal federation, and not international recognition of the illegal, breakaway state established by Ankara in the Turkish-occupied north and supported financially and with a 40,000 strong army by Turkey.

A spate of reports in the Greek press indicated that Prime Minister Mitsotakis was about to do the same but decided not to when more prudent views prevailed, as such a move would transform the tempest in a teapot over Tatar into a full-fledged rupture of relations between the Greek government and the Archbishop of America.

That would have been a diplomatic disaster for both sides, alienating from Athens and burning bridges with one of the most powerful and influential voices of the Greek-American community.

Hence, Mitsotakis and Elpidophoros will indeed meet today at Ground Zero, where the archbishop will take the PM on a tour of the splendid marble Saint Nicholas National Shrine, which bears some architectural similarities with Hagia Sophia, that has been erected as a symbol of peace and brotherhood and a place of prayer on a site of untold disaster, exactly 20-years after the attacks on the World Trade Center shook the planet

The delicate balancing act of the Ecumenical Patriarchate

Whether or not he knew Tatar would be attending Erdogan’s grandiose ceremony– which was not unlikely – Elpidophoros attended both as archbishop and as the representative of the Ecumenical Patriarchate, which over the decades has had to make strenuous efforts to maintain good relations with an often oppressive Turkish state and government.

Few without inside knowledge of the workings of the patriarchate know how difficult a balancing act that can be, as the patriarch must engage in a diplomatic and judicial struggle to persuade Turkish authorities to respect the basic rights of the dwindling Greek minority of Istanbul and of the Ecumenical Patriarchate itself, even as he makes foreign leaders and countries aware of its predicament.

According to the protocol, a visit with the Turkish Ambassador is standard fare on all of Vartholomeos’ many trips to foreign capitals.

A refusal by Elpidophoros to accept an invitation to attend Erdogan’s celebrations would clearly be interpreted as an insult and affront to Turkey’s authoritarian president by both the archbishop and the Ecumenical Patriarchate itself, with unforeseeable consequences for the first-ranking Church of Eastern Orthodoxy.

It is indeed hard to fathom how the Greek PM may have thought of entering into a diplomatic row with an institution that serves as an invaluable bridge between Greece and the US and between Greece and Turkey, as the Ecumenical Patriarch’s frequent declarations about the overarching importance of peace and justice in the relations between the two neighbouring countries and peoples have made Vartholomeos a towering voice of reconciliation.

What is important is that the PM avoided the temptation and trap, realising, one hopes, the invaluable role of the Ecumenical Patriarchate and the Archdiocese of America as a bridge over troubled waters, ignoring the voices of frenzied super-patriots, and avoiding petty political grandstanding for his domestic audience and political base.