You can translate this blog in over 100 languages within a second! Go to the left up top where it says Translate. Happy navigating. See you again.

Empty of Gamblers and Full of Water, Atlantic City Reels 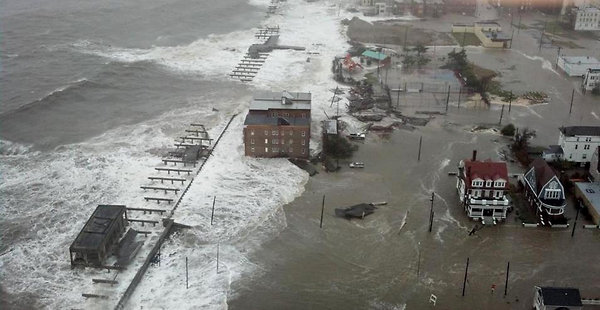 But when water rose near their home on Monday, they retreated to a relative’s place. It flooded. They sped to a school converted into a shelter, but they could not stay with their dog, a puppy named Brooklyn. So they were shuttled to the Sheraton Atlantic City Hotel, not far from the famed Boardwalk, where last-minute evacuees were being put up.

ATLANTIC CITY — The weather chased them in all its steadfast fury, as if mocking them at every haven they tried. The four of them — a mother, two children and a cousin — thought they could wait the monster out, ride the luck that Atlantic City promises.
Outside, the wind screamed and ankle-deep water lapped at the sides of the hotel. The power was out and the hotel was running a backup generator. The four of them were beyond drenched.
“We’ve never experienced anything like this,” said Cristal Millan, 21, the cousin. “Hopefully the house is still there. To be in the middle of this is scary.”
Hurricane Sandy captured Atlantic City and refused to let go. As the rainwater and surging waters of the ocean that hugged its beaches invaded its streets and wrenched apart pieces of the Boardwalk, the city was left an anxious and isolated island. Inside the casinos, no dice rolled, no cards were dealt and no slots beeped.
“The city is under siege,” said Thomas Foley, the city’s chief of emergency management. “Sandy is pretty furious at Atlantic City. She must have lost a bet or something. As we say in our slogan, ‘Do A.C.’ She’s doing A.C., all right.”
Even as the first samplings of the storm’s ravages descended on the New Jersey coastline, Atlantic City was already in big trouble. At high tide around 8 a.m., officials said 70 to 80 percent of the city was underwater. Water as much as eight feet deep coursed through some streets, leaving them impassable. Heavy rains and sustained winds of more than 40 miles an hour, with gusts of more than 60 miles an hour, battered the city.
The storm made landfall near Atlantic City around 8 p.m. with even stronger sustained winds, reaching up to 80 m.p.h. Late Monday, the bright lights of the city’s casinos remained illuminated, but water surged through its streets once again, reaching thigh-high near the Atlantic City Convention Center.
All arteries leading in were closed, and officials speculated that they might remain shuttered for days. No one could enter Atlantic City. Or leave.
The fate of the city’s residents stoked new tensions between Gov. Chris Christie and Mayor Lorenzo T. Langford, who have long been at odds.
At a news conference early in the evening, Mr. Christie criticized Mr. Langford for telling people they could seek shelter in the city and did not necessarily have to evacuate. “He was sending out a message that was counter to my message,” Mr. Christie said. The phone at the mayor’s office was not answered. The storm’s punch was something unfamiliar to even those like Mr. Foley, who had been in Atlantic City when the savage “Ash Wednesday Storm” of 1962 struck and flooded the city’s grand hotels and tore away part of the Steel Pier, destroying the tank of the diving horse.
“I’ve seen nothing like this one,” Mr. Foley said. “This one has been unbelievable.”
The storm radically transformed this gambling mecca of 40,000 into a chastened city. On the order of Governor Christie, the dozen casinos closed at 4 p.m. Sunday. It was one of only a few times in the gambling industry’s 34 years in New Jersey that wagering was silenced.
About 40,000 casino workers were sent home; each casino retained a skeleton crew of 50 to 75 people for security and surveillance.
“I’ve been working here 32 years and never saw the water this high,” said Toni Rodio, president of the Tropicana Casino and Resort.
By early evening, no flooding was reported in the casinos themselves, though some experienced wind damage.
A citywide curfew took effect at 3:30 p.m., and officials said they did not know when they would lift it.
The National Guard dispatched high-water trucks for the police and firefighters to try to evacuate about 400 people who had become stranded.
Thousands of people had fled on their own; emergency personnel previously shunted about 2,000 residents to shelters inside and outside the city. Rescuers were also using lifeboats to try to reach residents remaining in flooded areas.
“Unfortunately, a lot of people thought this was a hoax or it was not going to hit them,” Mr. Foley, the emergency-management official, said. “Then when water starts coming in their front door, they call.”
The city was taking final evacuees to four last-ditch shelters in Atlantic City. The city earlier had two other shelter options, but they became flooded and had to be abandoned. Late in the day, winds reached speeds at which city officials deemed it too risky to send out rescuers.
Amid everything else, in early afternoon a gasoline spill in City Hall from floating basement gas tanks shorted out some 911 equipment, and the city almost had to abandon its 911 system. It managed to keep it operative.
One 50-foot portion of the Boardwalk, worn down by earlier storms, was chewed apart. Chunks of wood floated down flooded streets like crude rafts. “Timbers on Atlantic Avenue” came reports from first responders on police scanners.
Still, even in the buffeting wind and pelting rain, a few souls with motives of their own dared to venture out. Leamon Davenport, 54, a hospital pediatrician, waded through ankle-deep water on a street by Caesar’s casino. He had come from the boardwalk. He wanted to snap pictures of a fury that was making history.