You can translate this blog in over 100 languages within a second! Go to the left up top where it says Translate. Happy navigating. See you again. 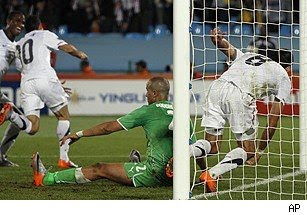 The best player on the U.S. national team confirmed his place as the best player in U.S. history at the moment when his team and his country needed him most. Thanks to a lightning-quick stoppage-time counterattack started and finished by 28-year-old Landon Donovan, the Americans overcame an amazing series of earlier misses and their Algerian opponents to win 1-0, and advance to the World Cup's round of 16 as the winners of Group C.
The circumstances could not have been more dramatic or gut-wrenching. A 20th minute goal from Clint Dempsey was called back because of an erroneous offside call from the Belgian linesman, perhaps setting the U.S. up as tragic figures in a play ruined by wayward referees.
But the U.S. had no one but themselves to blame after that. They dominated the match, proving far more threatening on the attack than the Algerians and creating numerous blue-chip scoring chances. The opponents, also with an opportunity to advance if they won thanks to England's 1-0 win over Slovenia, saw their best chance to score hit the crossbar in just the sixth minute and struggled to create much consistently from then on.
The U.S. only struggled near the goal. The litany of misses began in the 35th, when Clint Dempsey failed to convert a smart low pass from Donovan. The misses got ridiculous two minutes later, when Michael Bradley freed Donovan on the right, after which the eventual hero tried to chip the ball toward goal. Jozy Altidore was there at point blank range but turned and somehow blasted his short-range shot over the bar.
Things got eerie, and agonizing, in the 57th minute, when Dempsey latched onto Altidore's deflected cross and somehow curled his shot flush off the right post, despite having time and the whole net at which to shoot. It seemed clear that there was something amiss. It was one miss too many. Perhaps the U.S. was playing Algeria, the refs and fate.
Dempsey hit the rebound wide of the left post. The ball was not going to go in for the Americans, no matter how much they dominated. Eleven minutes later, substitute Edson Buddle hit the goalkeeper with a point-blank header.
"You think two things when watching pressure go unrewarded like that," coach Bob Bradley said. "There are times when that happens and you just say, 'it's not our night.' But the real thing that you do as a coach is you keep trying to think of what's going on in the game. Are we still creating chances? How many [substitutions] do we have left? What else can we do to keep giving ourselves a chance to get the goal? In the end, it's just the efforts of the players that make the difference."
As the minutes dragged on, Bradley did what he could, inserting offensive players like Buddle and DaMarcus Beasley and urging his team forward. But the game became a bit more haywire as desperation set in and players began to tire, and there was a sense that the U.S. was nearly resigned to a dismal elimination.
"Sometimes in soccer you have games like that, where you have a lot of chances and they don't go in. To be fair to [Algeria], they had a few chances as well, especially early on," Donovan said. "But the only thing you can control is if you keep going. We knew that they were pushing and we had to take some chances, and the guys in the back did an unbelievable job of stopping counter[attack] after counter from them and just giving us a chance to score, so we could finally get it."
Then, when all seemed lost, Donovan saved the day. Tim Howard started the play just as the 90th minute expired, launching a long throw to Donovan on the right. He'd been invisible almost the entire second half, despite an excellent first, but took his opportunity with the confidence he promised everyone he'd show when the moment came.
Donovan slipped the ball to Altidore on the right, and he crossed it low and in front. Dempsey was there, but so was Algeria goalkeeper Rais M'Bolhi. Another chance snuffed out. Or just plain missed. World Cup oblivion beckoned. But then so did the ball, squirting out toward the six-yard line, and the opportunistic and relentless Donovan was there. He didn't miss, and then raced toward the left corner flag where he was met by a pile of jubilant teammates.
"I knew that they had pushed a lot of numbers forward so when the ball broke, a lot of us had almost cheated, for lack of a better word," Donovan recalled. "When the ball came I wanted to take a good touch forward and be aggressive right away, and I had a lot of options. At the moment I chose Jozy, and he did a good job of putting a dangerous ball in to Clint, who did a great job of making an effort to get in front of the goalie and then it just bounced there."
It was Donovan's second goal in this World Cup, fourth overall (he had two in 2002) and extended his career national team record of goals scored to 44.

"I've been through a lot in the last four years," Donovan said through tears afterward, referring to his dismal showing at the 2006 World Cup and the subsequent criticism, his divorce, the public fallout from his comments about David Beckham and the subsequent book in 2009 and his effort to remake himself into a more confident player and complete person. "I'm so glad it culminated this way, and it makes me believe in good in the world, when you try to do things the right way, it's good to see them get rewarded."
The U.S. won Group C with a 1-0-2 record. It marked the first time since the inaugural World Cup in 1930 that the Americans finished atop a first-round group. Only 13 teams entered that World Cup, however, while this time around, 204 started the process and 32 made it to South Africa. England finished with the same 1-0-2 mark and each team had a +1 goal differential, but the Americans won out on goals scored, 4-2. They will face the Group D runner-up Ghana on Saturday in Rustenburg in a single-elimination round-of-16 match, confident that they can handle any challenge or adversity that comes their way.